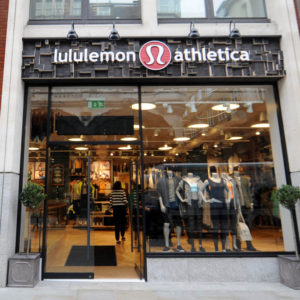 There is no name more synonymous with Women’s Activewear than Lululemon with its meteoric rise from its humble beginnings in 1998. The rise is more akin to an online company such as Google, Amazon, Facebook and others than to a brick and mortar store. It’s a fascinating story of a small operation taking on the big guys and beating them at their own game. Lulu’s selection of Yoga Pants, Tops, Shorts, Sweaters, Jackets, as well as accessories such as Yoga Mats and Hair Accessories has become the default leader for women.

Some analysts of the industry believe that Lulu will not only continue its growth in the woman’s activewear segment but will increase its exposure with more products and its most recent strategy of focusing on menswear. We must remember that the largest activewear provider Nike, started as a sneaker company and has grown to dominate the market of all things sports and much more. With a current Market Cap of approximately $30 billion, Lulu is a company that will not soon go away.

How Popular is the Lululemon Brand?

For anyone that doubts its dominance in the activewear business, all you need to do is to guy into any mall with a Lululemon store. On any given day there will be two stores which are always crowded. One is the Apple store and the other is Lululemon. Both stores are organized chaos and might send you online instead of dealing with the crowds, but will no doubt spark your interest in the brands.

Up until recently the Lululemon store was filled with mostly women, and a few male stragglers tagging along with a look of dread. There were also a few men shopping for their spouses and trying to figure out what to buy, although chances were that whatever they bought would be returned, but I digress.

Lulu has decided to expand its product line into men’s activewear which is a risky move but one which should payoff. It will take some time before men to get used to going into the Lulu store to get some products, but if they want to give them a try, they can always go online.

What makes Lululemon so Successful with Women?

Let’s be honest, activewear in most respects is a commodity. Not to say that each brand doesn’t have its own style, quality, reputation, and demographic, but with so many brands available, it is difficult to distinguish yourself from others. Lululemon has been able to separate itself through slick marketing and absolute dedication to its customers.

Lulu was able to find a niche in the activewear market, and with a lot of dedication and courage, was able to capitalize on this under-represented segment. Unlike the previous and current activewear at the time, there was no product that was as high-end as Lulu and offered themselves as not just a brand but a lifestyle.

Not just clothing, Lulu was able to create a community which was part of how you lived your life and who you are. This community and lifestyle are based on the qualities and characteristics of Yoga with its physical, mental, and spiritual practices. Those who buy Lulu products are not just customers, but disciples who want to create a better life for themselves and others.

Getting back to the discussion of “commodity”, as other companies are finding excuses to discount their products and go for more volume, Lulu rarely has special sales and is always in the top tier as far as cost. This gives Lululemon a certain panache among its current customers as well as first-time buyers.

Is Lululemon the top Activewear Brand?

Imitation is the greatest form of flattery and when new or established brands are marketing themselves, they always seem to use Lulu as the gold standard to try and bring down. Saying a product is the best is subjective, although can be objective as well. With its high-quality material and contemporary styles, Lulu is one company that leads the activewear pack and will continue to be the King of the Hill in this market segment for a long time coming.

Iconic One Theme | Powered by Wordpress